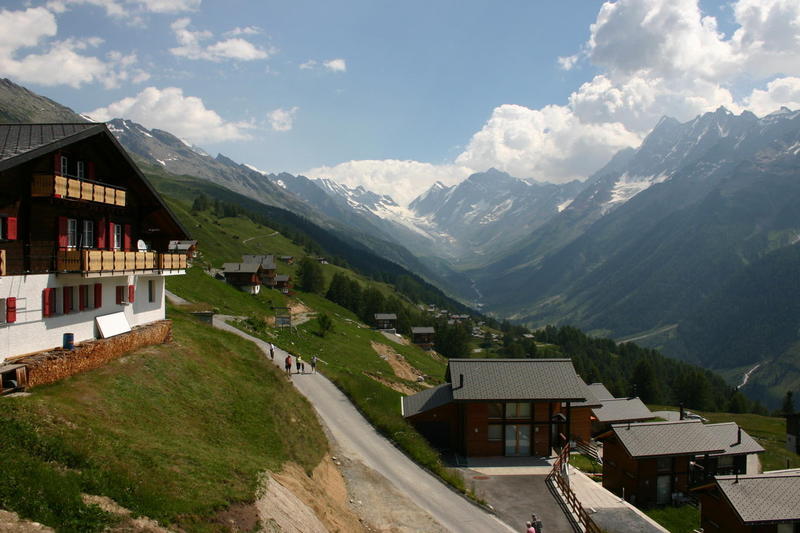 This is another Höhenweg walk with many variations. The complete Höhenweg goes from Fafleralp at the top of the Lötschental valley, back to Goppenstein. A much easier variation would be to walk up the Lötschental Höhenweg from the Lauchernalp to Fafleralp.If you do the walk in reverse, starting from Goppenstein, the hard climb comes first but you need to check bus times back from Fafleralp before you set out. Take the BLS train to Goppenstein and swap to the Post Bus there - the connections are usually very good. For example in 2009, trains from Kandersteg are at 41 past the hour, getting to Goppenstein at 57 past the hour; the Post Bus leaves at 05 past the hour, arriving at Fafleralp at 38 past (and Wiler for the Lauchernalp cable car, at 15 past) - about 1 hour from Kandersteg to Fafleralp. As you leave the train, you will need to go down the steps and turn left to reach the Post Bus (it's on your left as the train comes into Goppenstein station from Kandersteg). At Fafleralp you can look up towards the glacier at the end of the valley, through a carpet of alpine flowers. The Lötschental Höhenweg is signed from the car park. The path rises and falls but there are no really steep parts until you reach the very end at Faldumalp above Goppenstein. You pass Schwarzseeli (also signed Schwarzsee) about 45 minutes after leaving the Fafleralp. Sometimes there are huge tents set up here for groups and the lake itself is a favourite paddling, swimming and picnic spot. Look out for the alpine flowers around here - the large red lilies are particularly dramatic. Continuing along the Höhenweg you reach the Tellialp where a small bridge crosses a raging stream. There is a restaurant here. There is also a path down to Blatten in the valley. The next decision point is at Biel where again there is a path down into the valley at Wiler via Fischbiel but this is a steep zigzag path - you have at least 600m to lose getting to the valley floor. If the weather has closed in you are probably better continuing for another half hour to the cable car at the Lauchernalp and going down that way. The views down into the valley continue to be magnificent. If you are continuing along the Höhenweg then make sure you follow Höhenweg signs around the Lauchernalp or you will have to lose and gain an extra 100m descending to the cable car station. There are restaurants at Stafel on the Höhenweg if you need refreshments. At the Hockenalp there is another zigzag path that will take you to the valley floor at Kippel. Similarly, there are ways down from the Kummenalp and Restialp (restaurants in both villages), into Ferden. The western most point of the Lötschental Höhenweg is at Faldumalp with its tiny church and magnificent views up the whole Lötschental valley. The way down to Goppenstein is very steep - you have 800m to lose down a bergweg path, before it arrives directly at the back of Goppenstein station. The distances along the Lötschental Höhenweg are approximately: The height rises and falls along the length of the path but the only steep part is if you descend into the valley. The whole walk is signed as 6 hours 10 minutes from the Fafleralp to Goppenstein and it will almost certainly take at least that. Fafleralp to the Lauchernalp is an easy two and a half hours (either way around) though it may take longer as you stop to admire the views and the flowers. If you decide to start from the Lauchernalp and walk up to Fafleralp, you can always extend the walk by continuing up the valley some way towards the glacier. 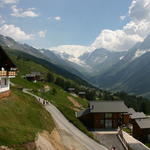 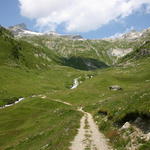 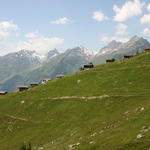 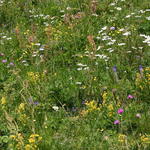 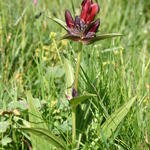 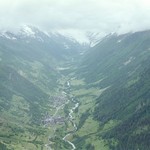 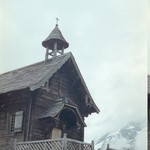