Ausserberg - South of the Rhone

Start from the Höhenweg Südrampe, drop down to the Rhone Valley and take a cable car from Turtig. Unterbach seen from Bürchen: 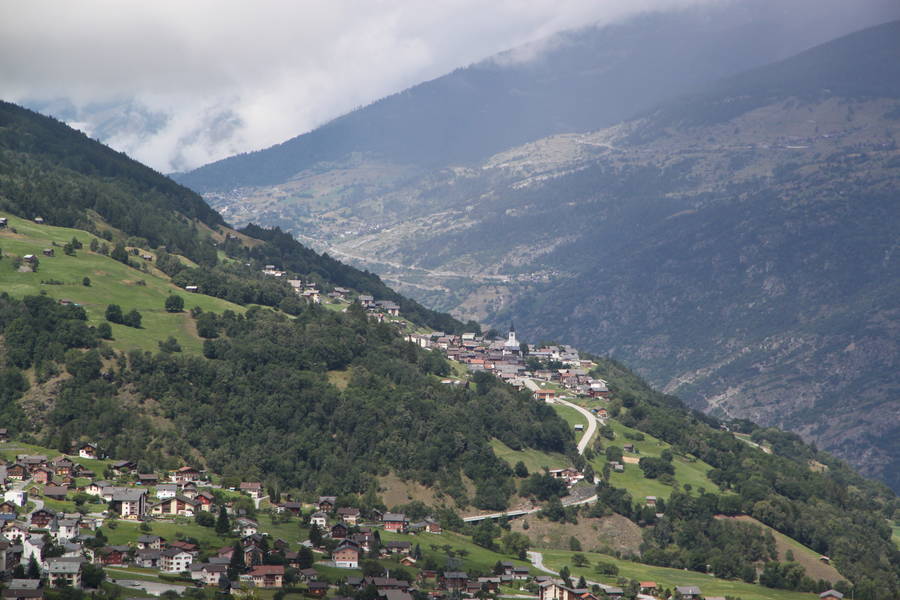 If the weather is poor in Kandersteg and not brilliant on the Höhenweg Südrampe, then explore the north facing alps south of the Rhone. Start from Ausserberg station on the Südrampe, leaving the southern platform and follow the path down into the Rhone valley. There are several information boards as you follow the "Kulturweg" downhill through the vineyards, arriving in St Germain after about 40 minutes (where there is a shop and a loo). There are good views of the Rhone valley and the bassistunnel portal. Continue down for another 20 minutes to Raron old church with its little gallery and fascinating history. Another 10 minutes takes you to the small town of Raron and crossing the bridge over the Rhone puts you in Turtig. There are two cable cars from Turtig to Eischoll and Unterbach - see http://www.fahrplanfelder.ch/fileadmin/fap_pdf_fields/2017/2250.pdf and http://www.fahrplanfelder.ch/fileadmin/fap_pdf_fields/2017/2253.pdf respectively. Both run every half hour at 25 and 55 minutes past the hour, taking about 8 minutes. From Unterbach, there is a chairlift that could take you higher to Brand ( http://www.fahrplanfelder.ch/fileadmin/fap_pdf_fields/2017/2254.pdf - it runs on the hour). From Unterbach it is 40 minutes walk to Bürchen which seems to be a sprawling area encompassing several hamlets - Bürchen Mauracker (1240m), Bürchen Häsel (1330m) and Bürchen Zenhäusen (1444m). It is well signed directing you on steep paths between chalets. There is a bus service through Bürchen ( http://www.fahrplanfelder.ch/fileadmin/fap_pdf_fields/2017/12.528.pdf ) that comes from Visp and continues up to Moosalp in the summer. There are excellent views down the Rhone valley and across to the Südrampe. After Bürchen, the path soon enters woodlands following the Eichhörnchen-Weg (Squirrel trail). The way is easy - at the unmarked junction in the woods, after the end of the squirrel trail, take the right-hand fork which leads to the signpost at Eggwald after another 5 minutes; a further 5 minutes reaches the road at Alt-Zeneggu where Visp is signed as another 2 hours and Zeneggen Dorf is 15 minutes via two different routes. The signs are a little sparse after this but you are heading downhill. We arrived at the bus stop at Ab Zenstadlen 25 minutes after Alt-Zeneggu. You are now heading for Visp following a path that zigs a fair way west via Helbrigacher, before zagging back to Oberi Albuachra; Visp is now signed as an achievable 40 minutes away. The path crosses the zigzagging alpine road several times before arriving at the bridge in Visp. Follow signs for the station (both bus and train) where there are various options to return to Kandersteg. Alternatively, walk through the bus station, turn left through the buildings and past the school until you reach the river Vispa; follow it to the confluence with the Rhone and cross the Rhone. At the northern side, turn left and then right down Rhoneweg; a yellow sign off this road marks the steep path up the hillside to Eggerberg and Eggerberg station. It is about an hour from Visp station to Eggerberg station. Overall a fairly easy day but a hard climb of about 160m at the end, from the Rhone valley up to Eggerberg. Another variation would be to take the cable car from Turtig to Eischoll and explore the village there, returning with the cable car to Turtig and Raron. A path follows the north bank of the Rhone heading west to Gampel and Steg. There is a path from Gampel to Hohtenn village (815m) and then a steep climb up the path to Hohtenn station at 1079m. Turtig to Hohtenn took a bit under 2 hours (signs are a bit lacking) and then 45 minutes from Hohtenn to Hohtenn station. 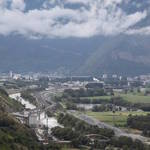 Rhone valley with bassistunnel portal and Visp beyond 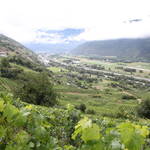 The southern slopes are devoted to vineyards 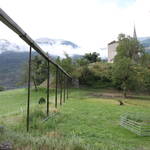 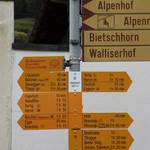 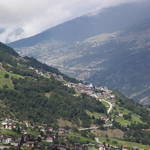 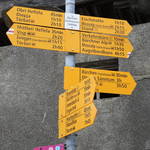 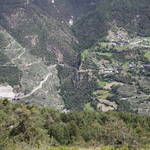