Walk contributed by Charles and Margaret Clement.
The Oeschinensee from the Heuberg path: 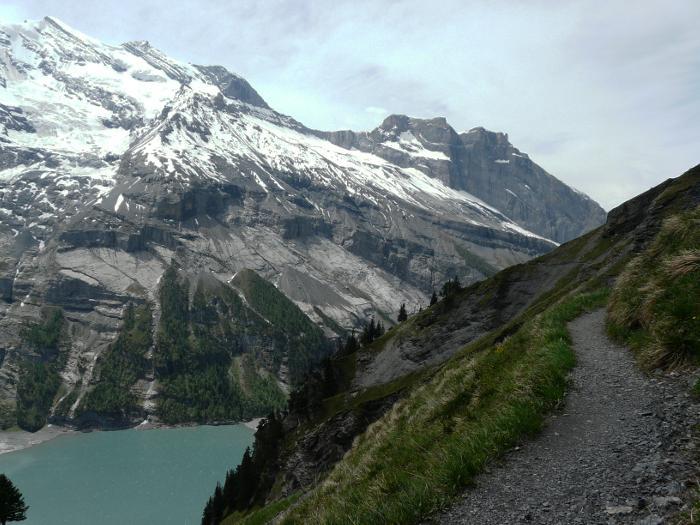 This is an easy day’s walk which is very scenically rewarding with views of Oeschinensee, one of the best and most popular Swiss mountain lakes. After an initial steep ascent, the walking is nearly all horizontal or downhill, though above Oeschinensee, the path is sometimes narrow and exposed. It is amply provided with opportunities to purchase refreshments and, on a fine day, you will encounter many people, particularly by the lake itself. Start from Kandersteg by taking a single up the Oeschinensee gondola; the path described involves walking back down to Kandersteg. Leave the restaurant at the top on the wide track to the Oeschinensee, but shortly afterwards turn left onto the upper path to the lake via Läger. You will soon encounter a signpost pointing upwards to the left to a path to Heuberg and Ober Bärgli. From there, it is a steep and strenuous, but not long, climb upwards to the wonderful viewpoint of Heuberg. There are two benches from where to admire the views down to the lake and across to the Blumlisalphorn, Frundenhorn and the Doldenhorn. This is the one stopping place where you will need to provide your own refreshments. Leave Heuberg on the path which, after an initial slight ascent, makes a mainly horizontal traverse to the pastures at Ober Bärgli. It snakes in and out of the steep mountainside, passing several streams, and provides great panoramas of the lake from above. To the left are steep mountain meadows, ungrazed by farm animals and filled with flowers including globe orchids in July. The path finally descends slightly to the farm pastures at Ober Bärgli, populated by gentle cows in summer, and, after crossing a stream, reaches a junction with the path from the lake up to Hohtürli and the Blümlisalphütte. Turn right to descend to the lake; there is a restaurant just above the path. If you have your own provisions, a good place for lunch is on the cow-free meadow just a little way down on the right of the path. Below the meadow, the path descends a steep section by a series of steps which are well safeguarded with wire ropes. The Unter Bärgli pasture is then reached where there is another small restaurant. After crossing a stream, the wider path then traverses the cliffs above the lake, passing under overhangs in places, before descending to a signpost near to the lake shore. The upper path there returns upwards to Läger and the gondola station. Take the lower path near the shore to two restaurants and a window where soft ice creams can be obtained! After suitable refreshment, leave the lakeshore down the road which is left on a Wanderweg, straight on to follow the winter ski track. On a large meadow take the path to the right of the track which, after a horizontal traverse, zigzags down to rejoin the track and a road. Take the Wanderweg to the left of the road immediately by the river. At a bridge path junction turn right to reach the gondola Talstation, or, for central and south Kandersteg, keep on the path by the river and pass through a gap to the right to reach the road from the Talstation to Kandersteg. The total ascent during the walk is about 300m, and descent to Kandersteg 800m, so there is plenty of time to enjoy and photograph the marvellous views around Oeschinensee. This walk is just as rewarding taken in the opposite direction, going from the lake past Unter Bärgli to Ober Bärgli and then back via Heuberg. 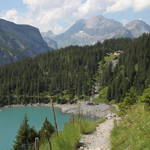 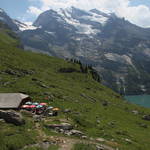 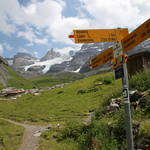 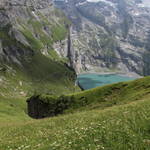 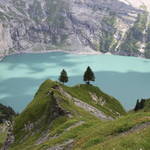 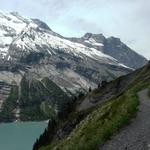 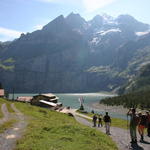 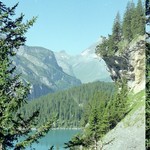 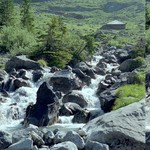