Long distance path 26 goes all the way around Lake Thun. Thunersee from Spiez: 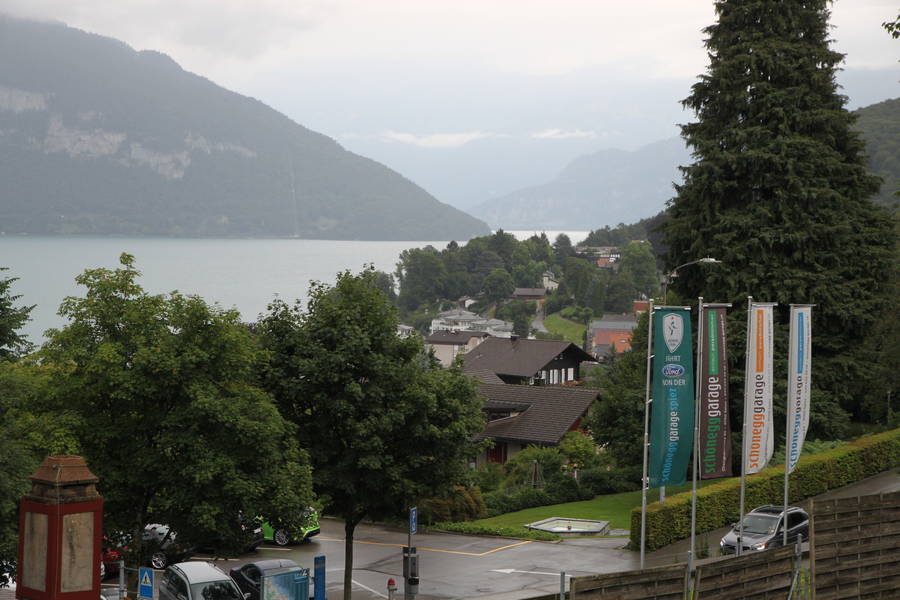 This long distance path has good information on the Swiss Mobility website at http://www.schweizmobil.ch/en/hiking-in-switzerland/routes/route-026.html, which suggests the entire path can be walked in four stages: The path is generally easy with a little gradient in places but often staying close to the lake shore with stunning views up and down Lake Thun.

The train from Kandersteg leaves at 12 minutes past the hour, arriving in Spiez at 44 minutes past. From the railway station, head downhill towards the swimming pool. Enjoy the gardens on the west side of the pool where the main features are attractive vegetables rather than flowers - the squashes are particularly effective. At the lake shore, join the Strandweg following signs for Faulensee which is around the headland, east of Spiez. As you are approaching Faulensee there is a small fish farm with information boards and some quite large fish. Continue on Strandweg past the pier for the lake steamer, keeping close to the lake shore, now following signs for Krattigen. At Güetital, the Panoramaweg turns right through Krattigen and climbs nearly 500m in the foothills, bypassing the town of Leissigen to return to the lake shore outside Därligen. Alternatively, a footpath continues alongside the road, keeping very close to Lake Thun and in to Leissigen. Därligen is signed as 1 hour 15 and Interlaken as 2 hours 20. Wander through Leissigen following signs for Därligen, passing through open meadows. You pass a junction that could take you to Finel and Meilisalp, continuing to the next juction at Egghubel (660m). The path continues down into Därligen where you rejoin the Panoramaweg. The path now continues beside Lake Thun until you reach the outskirts of Interlaken in a good hour. Interlaken West railway station offers a train back to Spiez at least every half hour. The following times all allow plenty of time for admiring the lake.

The following times all allow plenty of time for admiring the lake. From the railway station, head down towards the swimming pool and the Schloss, passing through the "vegetable" gardens. Follow through the town to the Schloss and take some time to explore this castle and its gardens. Depart climbing through the vineyards at the back of the castle, following signs for Speizberg and Einigen. Speizberg is a wooded area above Lake Thun. Continue on path 26, still following signs for Einigen. The path crosses the road and the railway through open meadows; the view to the south is dominated by the Niesen. Einigen is a small lakeside village with an ancient church. Path 26 is signed now to Strättligsteg and Gwatt. You cross the Kander River shortly before Gwatt which is the beginnings of the outskirts of Thun. Before reaching Gwatt, take the side path to Strättligturm which is a 13th-century castle for defending the hilltop. At Gwatt the path now runs right beside Lake Thun through public parkland and a sports stadium until it arrives through Dürrenast at Schadau Park where the lake ends and the River Aare flows through the town of Thun. The railway station is about 20 minutes from Schadau Park. Occasionally this route is a little short of signposts; if in doubt, follow the yellow wanderweg signs or yellow diamonds. 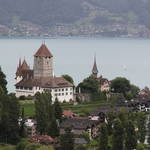 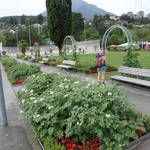 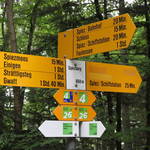 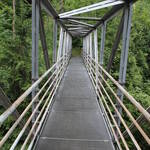 Bridge over the Kander 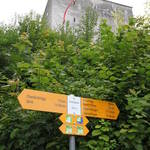 The mansion in Schadau Park (now a restaurant) 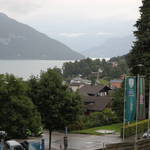 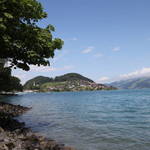 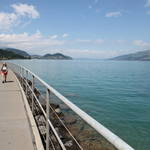 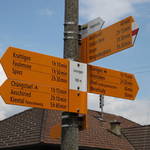 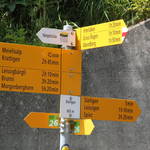 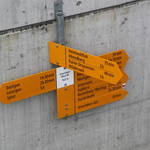